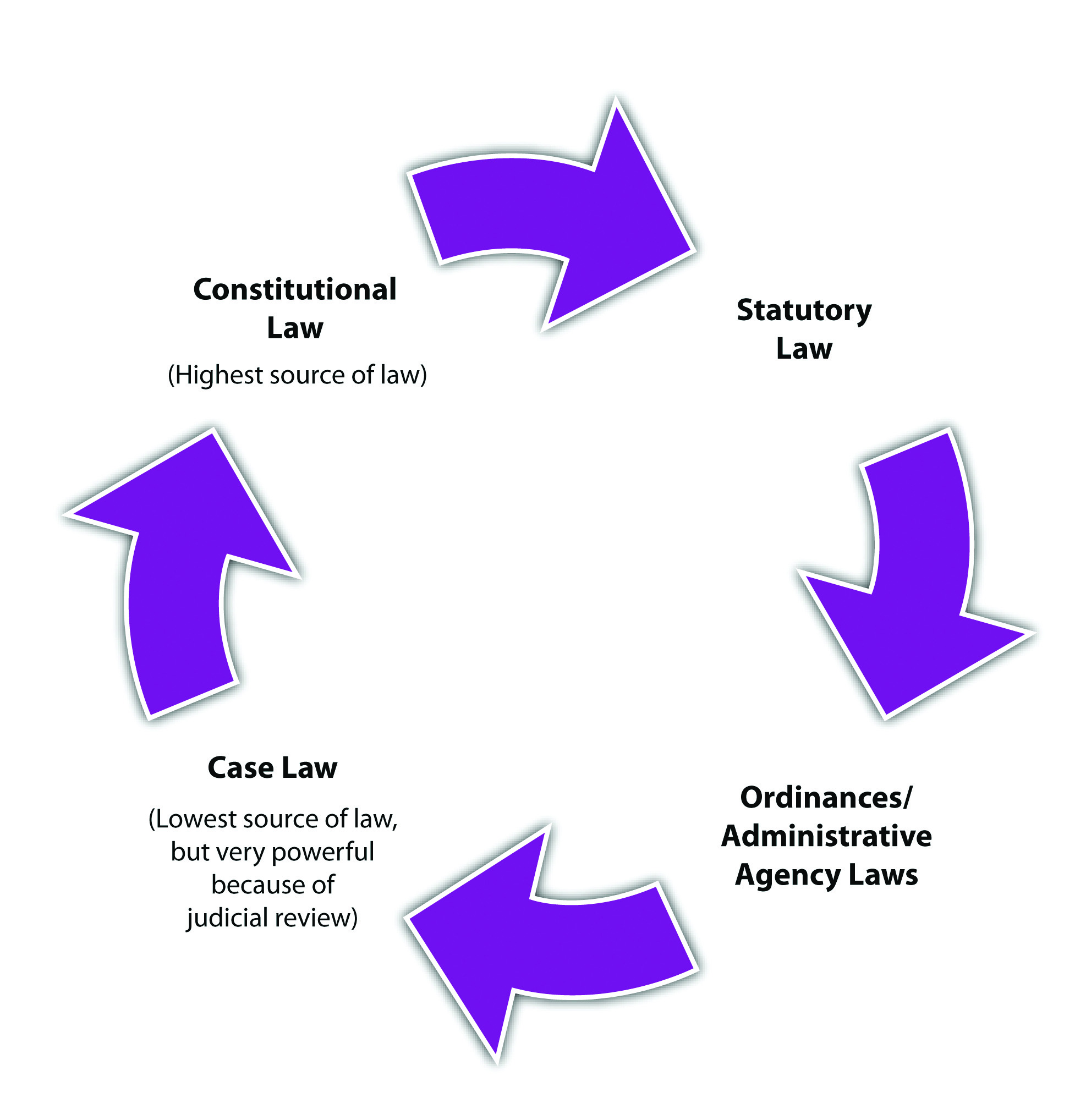 Law comes from three places, which are referred to as the sources of law.

The purpose of federal and state constitutions is to regulate government action. Private individuals are protected by the Constitution, but they do not have to follow it themselves.

Example of Government and Private Action

Cora stands on a public sidewalk and criticizes President Obama’s health-care plan. Although other individuals may be annoyed by Cora’s words, the government cannot arrest or criminally prosecute Cora for her speech because the First Amendment of the US Constitution guarantees each individual the right to speak freely. On the other hand, if Cora walks into a Macy’s department store and criticizes the owner of Macy’s, Macy’s could eject Cora immediately. Macy’s and its personnel are private, not government, and they do not have to abide by the Constitution.

Exceptions to the Constitution

For safety and security reasons, we see more exceptions to constitutional protections in public schools and prisons. For example, public schools and prisons can mandate a certain style of dress for the purpose of ensuring safety. Technically, forcing an individual to dress a specific way could violate the right to self-expression, which the First Amendment guarantees. However, if wearing a uniform can lower gang-related conflicts in school and prevent prisoners from successfully escaping, the government can constitutionally suppress free speech in these locations.

Superiority of the Constitution

Statutory law is inferior to constitutional law, which means that a statute cannot conflict with or attempt to supersede constitutional rights. If a conflict exists between constitutional and statutory law, the courts must resolve the conflict. Courts can invalidate unconstitutional statutes pursuant to their power of judicial review, which is discussed in an upcoming section.

Ordinances are similar to statutes, except that cities and counties vote them into law, rather than a state’s legislature or a state’s citizens. Ordinances usually relate to health, safety, or welfare, and violations of them are typically classified as infractions or misdemeanors, rather than felonies. A written law prohibiting jaywalking within a city’s or county’s limits is an example of an ordinance.

In Old England, before the settlement of the United States, case law was the most prevalent source of law. This was in contrast to countries that followed the Roman Law system, which primarily relied on written codes of conduct enacted by legislature. Case law in England was mired in tradition and local customs. Societal principles of law and equity were the guidelines when courts issued their rulings. In an effort to be consistent, English judges made it a policy to follow previous judicial decisions, thereby creating a uniform system of laws throughout the country for the first time. Case law was named common law because it was common to the entire nation (Duhaime, L., 2010).

The English system of jurisprudence made its way to the United States with the original colonists. Initially, the thirteen colonies unanimously adopted common law as the law of the land. All crimes were common-law crimes, and cases determined criminal elements, defenses, and punishment schemes. Gradually, after the Revolutionary War, hostility toward England and modern reform led to the erosion of common-law crimes and a movement toward codification. States began replacing common-law crimes with statutes enacted by state legislatures. Oxford professor Sir William Blackstone’s Commentaries on the Law of England, which interpreted and summarized English common law, became an essential reference as the nation began the process of converting common-law principles into written statutes, ordinances, and penal codes (Duhaime, L., 2010).

In modern society, in many states and the federal government (United States v. Hudson & Goodwin, 2010), judges cannot create crimes. This violates notions of fairness. Making up a new crime and punishing the defendant for it does not provide consistency or predictability to our legal system. It also violates the principle of legality, a core concept of American criminal justice embodied in this phrase: “Nullum crimen sine lege, nulla poena sine crimen” (No crime without law, no punishment without crime).

In states that do not allow common-law crimes, statutes must define criminal conduct. If no statute exists to criminalize the defendant’s behavior, the defendant cannot be criminally prosecuted, even if the behavior is abhorrent. As the Model Penal Code states, “[n]o conduct constitutes an offense unless it is a crime or violation under this Code or another statute of this State” (Model Penal Code § 1.05(1)).

The common law still plays an important role in criminal lawmaking, even though most crimes are now embodied in statutes. Classification of crimes as felonies and misdemeanors is a reflection of English common law. Legislatures often create statutes out of former common-law crimes. Judges look to the common law when defining statutory terms, establishing criminal procedure, and creating defenses to crimes. The United States is considered a common-law country. Every state except Louisiana, which is based on the French Civil Code, adopts the common law as the law of the state except where a statute provides otherwise (Legal Definition, 2010).

Read Keeler v. Superior Court, 470 P.2d 617 (1970). In Keeler, the defendant attacked his pregnant ex-wife, and her baby was thereafter stillborn. The California Supreme Court disallowed a murder charge against Keeler under California Penal Code § 187 because the statute criminalized only the malicious killing of a “human being.” The court reached its decision after examining the common-law definition of human being and determining that the definition did not include a fetus. The court reasoned that it could not create a new crime without violating the due process clause, separation of powers, and California Penal Code § 6, which prohibits the creation of common-law crimes. After the Keeler decision, the California Legislature changed Penal Code § 187 to include a fetus, excepting abortion (Cal. Penal Code, 2010).

Generally, if there is a statute on an issue, the statute is superior to case law, just as the Constitution is superior to statutory law. However, judges interpret constitutional and statutory law, making case law a powerful source of law. A judge can interpret a constitution in a way that adds or creates exceptions to its protections. A judge can also interpret a statute in a way that makes it unconstitutional and unenforceable. This is called the power of judicial review (Marbury v. Madison, 2010).

Figure 1.5 Diagram and Hierarchy of the Sources of Law

Cases are diverse, and case law is not really law until the judge rules on the case, so there must be a way to ensure case law’s predictability. It would not be fair to punish someone for conduct that is not yet illegal. Thus judges adhere to a policy called stare decisis. Stare decisis is derived from English common law and compels judges to follow rulings in previous cases. A previous case is called precedent. Once judges have issued a ruling on a particular case, the public can be assured that the resulting precedent will continue to be followed by other judges. Stare decisis is not absolute; judges can deviate from it to update the law to conform to society’s modern expectations.

Rules of Stare Decisis and Use of Precedent

Case precedent is generally an appeal rather than a trial. There is often more than one level of appeal, so some appeals come from higher courts than others. This book discusses the court system, including the appellate courts, in Chapter 2 “The Legal System in the United States”.

Many complex rules govern the use of precedent. Lawyers primarily use precedent in their arguments, rather than statutes or the Constitution, because it is so specific. With proper research, lawyers can usually find precedent that matches or comes very close to matching the facts of any particular case. In the most general sense, judges tend to follow precedent that is newer, from a high court, and from the same court system, either federal or state.

Example of Stare Decisis and Use of Precedent

Geoffrey is a defense attorney for Conrad, who is on trial for first-degree murder. The murder prosecution is taking place in New Mexico. Geoffrey finds case precedent from a New York Court of Appeals, dated 1999, indicating that Conrad should have been prosecuted for voluntary manslaughter, not first-degree murder. Brandon, the prosecuting attorney, finds case precedent from the New Mexico Supreme Court, dated 2008, indicating that a first-degree murder prosecution is appropriate. The trial court will probably follow the precedent submitted by Brandon because it is newer, from a higher court, and from the same court system as the trial. 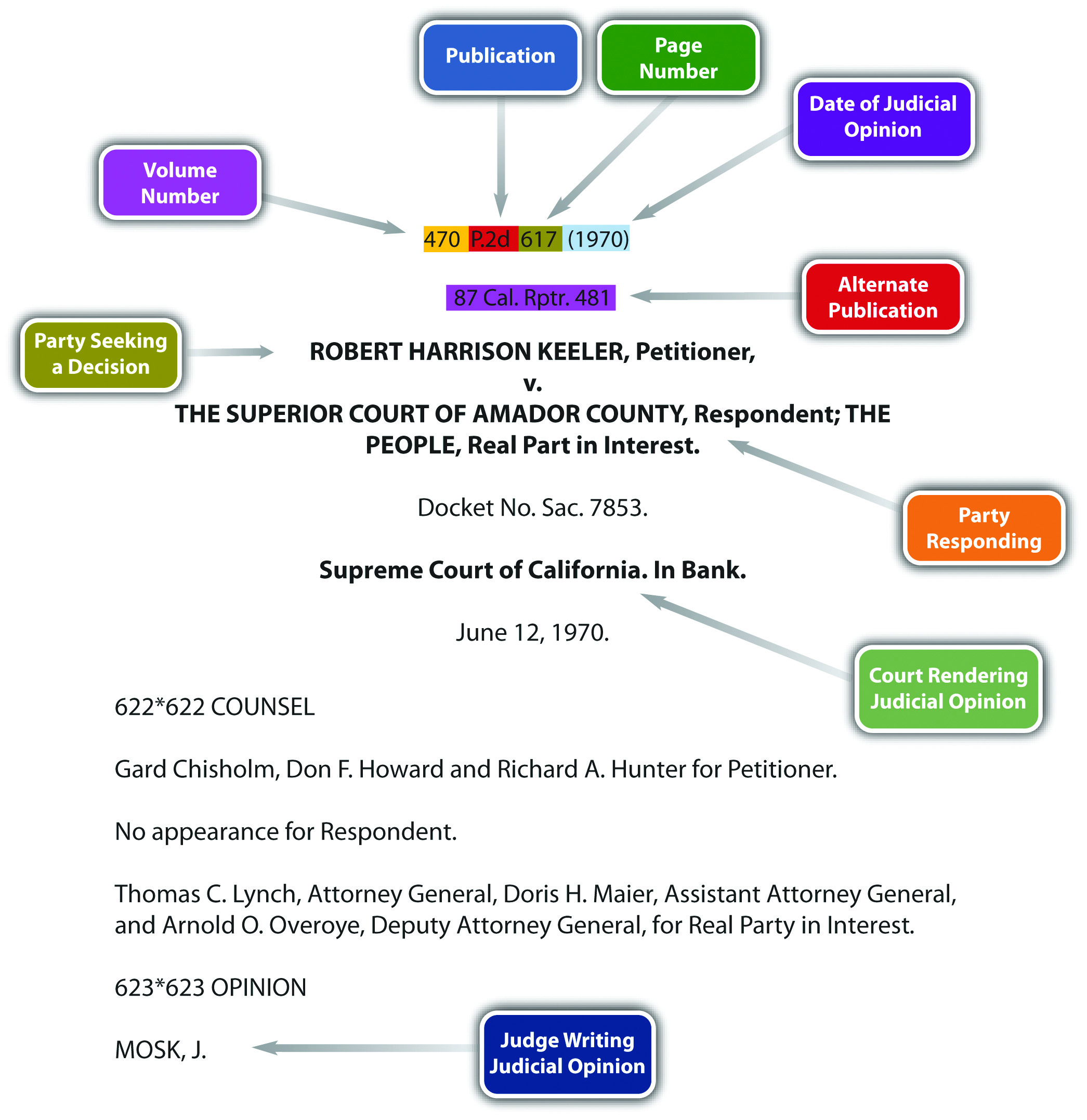 It is useful to condense judicial opinions into case brief format. The Keeler case brief is shown in Figure 1.7 “Keeler Case Brief”.

Published judicial opinions are written by judges and can be lengthy. They can also contain more than one case law, depending on the number of issues addressed. Case briefs reduce a judicial opinion to its essentials and can be instrumental in understanding the most important aspects of the case. Standard case brief formats can differ, but one format that attorneys and paralegals commonly use is explained in the following paragraph.

A procedural holding should follow the substantive holding. The procedural holding discusses what the court did procedurally with the case. This could include reversing the lower court’s ruling, affirming the lower court’s ruling, or adjusting a sentence issued by the lower court. This book discusses court procedure in detail in Chapter 2 “The Legal System in the United States”. Last, but still vital to the case brief, is the rationale. The rationale discusses the reasoning of the judges when ruling on the case. Rationales can set policy, which is not technically case law but can still be used as precedent in certain instances.